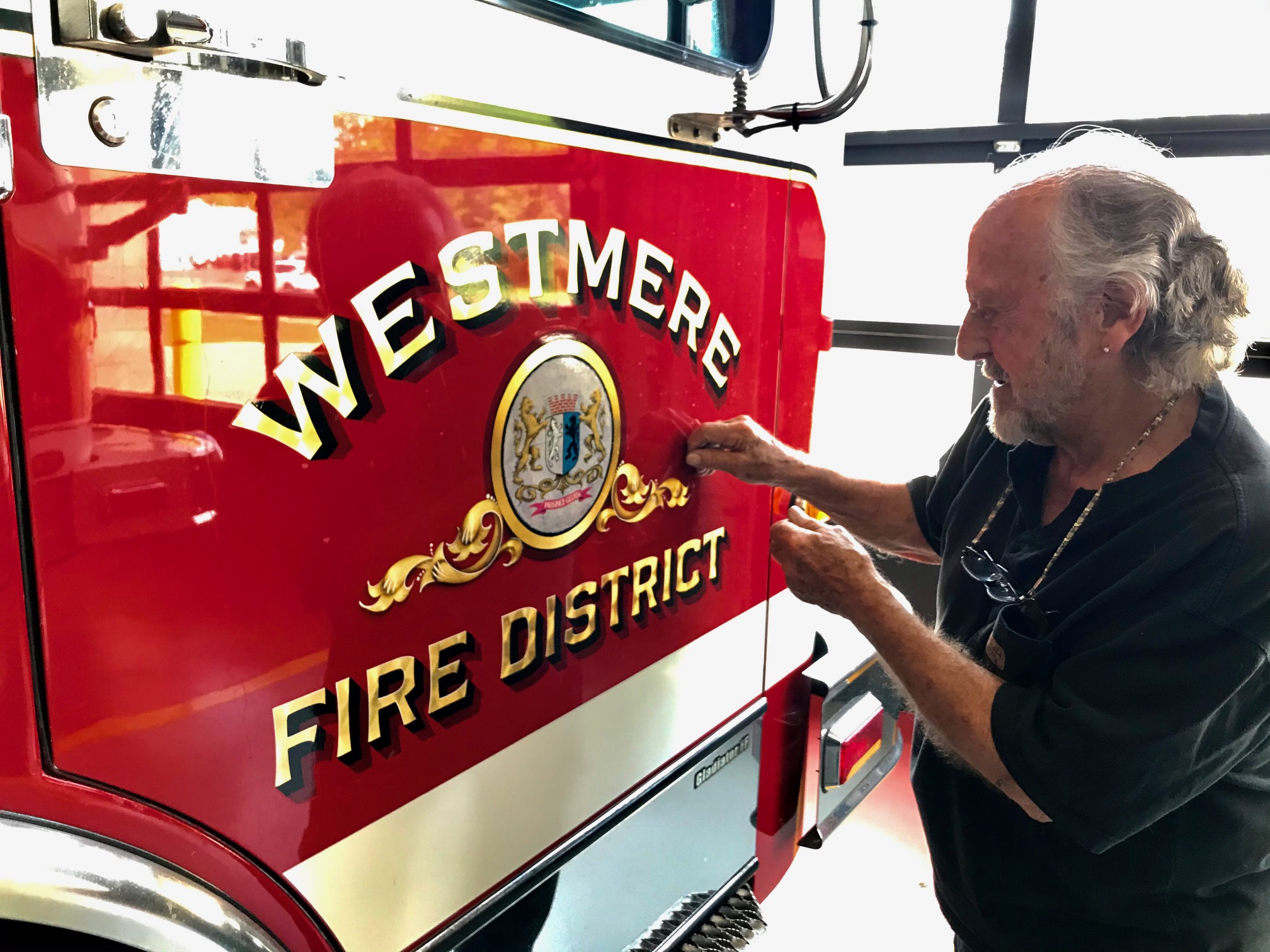 GUILDERLAND – Robert Francis Whelan picked up a tarpaulin covering a 1937 international fire engine at the Westmere Fire Department and gave a low whistle as the exquisite gold leaf scrollwork shimmered.

For Whelan, it was like seeing an old friend decades later. He had painted the fire truck in the 1980s. It is seldom driven – mostly for parades and special occasions – and Whalen hadn’t seen it in a long time.

“It looks like I did it yesterday,” said Whelan, 86, who is perhaps the most prolific fire truck painter of all time. Beginning in 1959, Whelan has painted custom lettering, scrolls, and insignia, and has embellished more than 640 fire engines with delicate gold leaf. He signed everyone.

His rolling canvases can be seen in New York and several other states. He was once hired to paint fire engines in Baton Rouge, La.

He painted every fire engine freehand, with a straight line, skillful brushstrokes and a self-confident line that is unshakable.

“It’s an unusual kind of art that has given me an incentive to be creative all these years,” he said. “I give everyone my best because firefighters are so proud of their fire engines.”

Whelan has practiced his craft through three generations of firefighters. He has painted almost every fire truck for decades at several local fire departments, including Westmere, Guilderland, Glenmont, South Bethlehem, Jonesville, and Fuller Road. He gets to know the members during long hours in the fire station and paints a fire truck. “They have become like family members to me,” he said.

Whelan, of Valatie, Columbia County, is also an accomplished portrait artist and self-taught.

He grew up in Elmont on Long Island. His father lost a leg in an industrial accident when Whelan was a child and the family never recovered financially. They went on welfare and Whelan went to work as a teenager to support the family. “The biggest mistake I ever made was leaving high school,” he said.

He worked in the Nassau County microfilming department for five years and was hired as an apprentice in a sign shop in his early twenties. During those years he was a volunteer firefighter in Oyster Bay.

“Practice makes perfect” was his father’s favorite phrase and his son took it to heart. Whelan practiced painting streaks and lines on old newspapers for three hours each evening to improve his craft.

After a year as an apprentice, he opened his first sign shop in East Norwich, a hamlet in Nassau County, in 1959. He rented part of a barn for $ 25 a month. “I had $ 60 for my name and I knew I had to have a woman and a baby to support her,” he said. In the same year he got his first fire engine appearance. Dwight D. Eisenhower was president.

Other fire companies hired him to paint their trucks, and he was constantly working on painting signs. In 1975 he moved to Chatham, Columbia County and opened SignArts in a carriage house on the property.

He was putting gold leaf on a window sign on a bank building in Chatham when an officer from the Ghent Fire Department stopped to admire Whelan’s work. He asked Whelan if he would paint her fire truck. He accepted the job and others followed.

Whelan is a self-taught singer and actor. He has appeared in several musicals at the Mac-Haydn Theater in Chatham and has done commercials, voice-over work and walk-in roles in soap operas in New York City.

“I could paint signs and fire trucks during the day and perform at night,” Whelan said.

Whelan also sang in the Mendelssohn Club of Albany for many years.

He sings while painting a fire truck. “It relaxes me,” said Whelan, whose favorite singer is Nat King Cole.

Whelan is fortunate to have exceptional eyesight – which is helpful when painting portraits and fire trucks – and chutzpah.

“With enough hard work, I can teach myself to be good at any craft,” he said. “I also have the ability to concentrate and shut everything out when I’m working.”

Whelan works in a studio converted from a garage attached to his home. His wife Lue supports his artwork and helps him manage it.

He has won local, regional and national awards for his portraits and has received a contract from a large pool of painters to paint portraits of CEOs at Pitney Bowes. He was commissioned to paint the portrait of Saint Marianne Cope, which is in the collection of the National Museum of Catholic Art and Library in Washington, DC. He is a member of the Portrait Society of America. 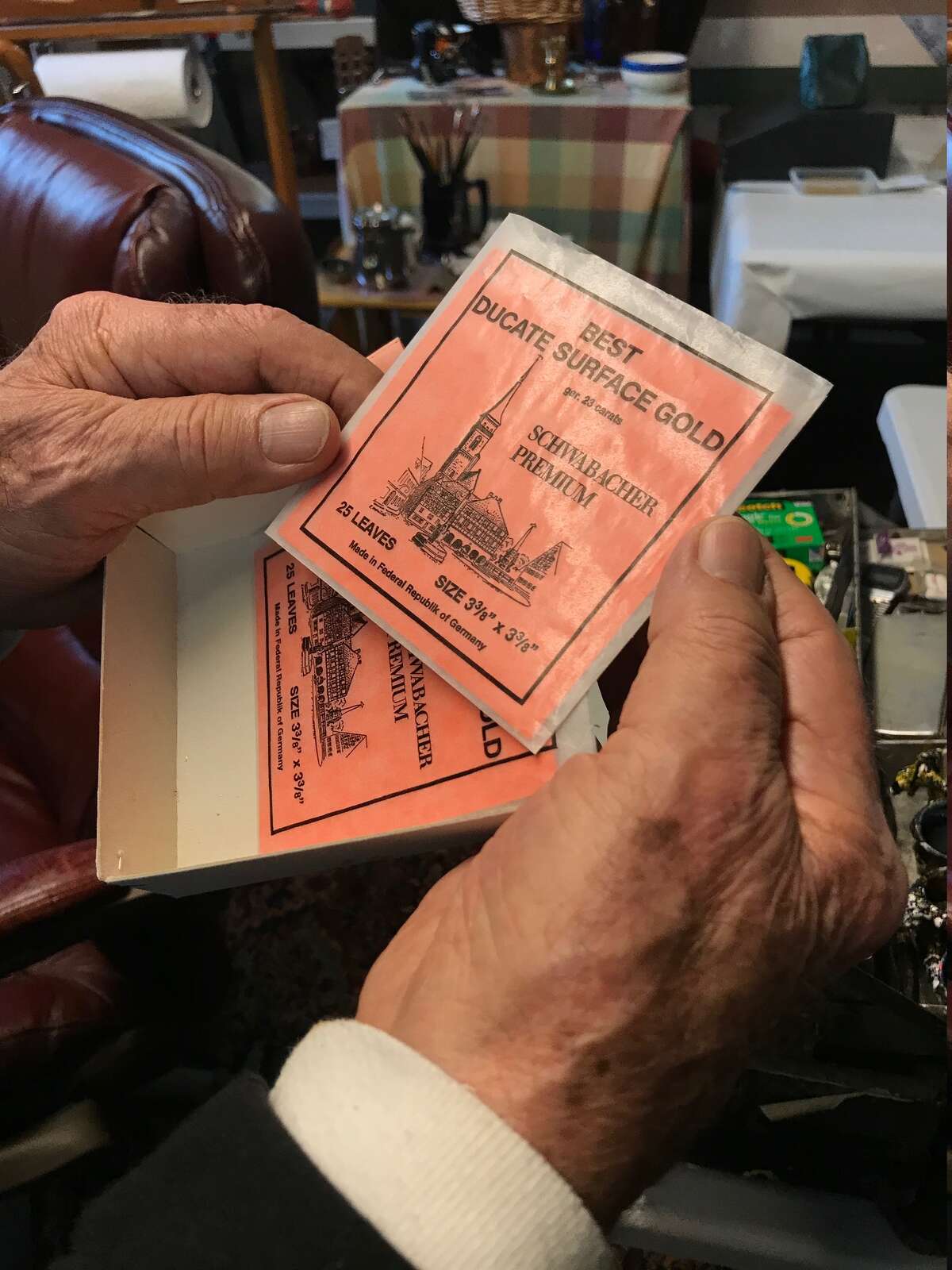 The steady work with fire trucks paid the bills and was a nice break from painting portraits.

The secret to the dazzling shine is to apply gold leaf to a translucent varnish when it is almost dry. He uses a velvet lace buffer to create the twist effect that creates a high sheen. He also uses thin white outline strips and shades of black to highlight lettering and insignia.

Material costs have skyrocketed over the years. For example, 23 carat gold leaf costs more than $ 1,000 for a small book of sheets the size of a deck of cards, tripling that in just a few years. Wafer-thin and tender, it requires careful handling. A clear protective layer is painted over the gold leaf.

“Firefighters work very hard and risk their lives and they deserve the best,” said Whelan, who opposes cheaper plastics.

After more than 60 years, he stopped working with fire trucks because at his age it was a challenge to reach for hours on a ladder, to bend over and to stand. Painting a fire truck takes one to two weeks, depending on the complexity of the design. He charges per truck and his hourly rate is comparable to around $ 50 to $ 100 an hour. He began to turn future work over to a protégé, James Fenten, who was apprenticed at Whelan’s sign shop as a student on Long Island in 1969.

“It’s an emotional thing to realize that at some point I have to stop,” Whelan said.

His gold leaf art has many admirers, including the Philadelphia fire truck gold leaf painter Charles B. Mullin.

“As practitioners of our craft, you have set the standard for excellent craftsmanship and innovation,” wrote Mullin. Whelan’s wife framed the letter.

Paul Grondahl is the director of the New York State Writers Institute at Albany University and a former Times Union reporter. He can be reached at grondahlpaul@gmail.com