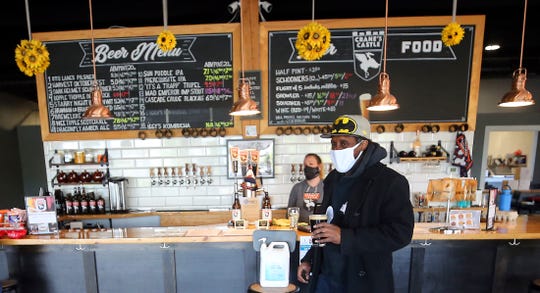 Robert Lewis of Bremerton picks up a beer from the bar and makes his way to a vacant seat to wait for his 15-minute observation time after he got his COVID-19 shot during a pop-up vaccination clinic in Cranes Castle on Thursday Brewing in Bremerton. (Photo: MEEGAN M. REID / KITSAP SUN)

EAST BREMERTON – A beer and a shot were on tap at Cranes Castle Brewery on Riddell Road on Thursday.

In the outdoor beer garden, the district’s health authorities staked out a COVID-19 vaccination clinic that gave 20 people a quick shot in the arm. They found beer to be a helpful motivator. The brewery offered $ 2 pints for those ready to get the shot.

“I’ve been pretty lazy so far,” admitted Levi Irish, 28, a planner / appraiser at Naval Base Kitsap-Bremerton’s inactive ship maintenance facility, as he sipped an IPA after his bump. “And it’s much better to do it in a brewery where I didn’t even have to stand in line.” 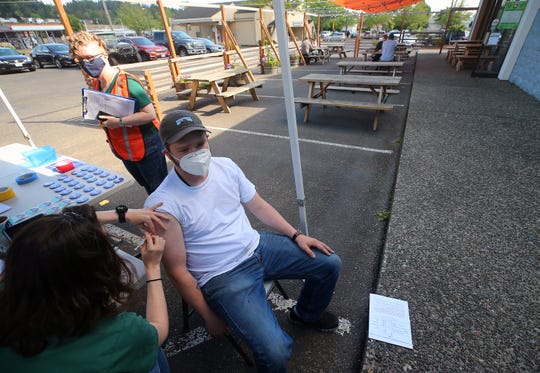 It is part of an effort by the Kitsap Public Health District to move away from mass vaccination clinics, where participation is declining, to smaller community settings “to meet people where they are,” said Dr. Gib Morrow, the county public health doctor.

More: Pub? Car dealer? Take the ferry? Health officials get creative when it comes to getting shots in the arms

Robert Lewis, 39, said he had seen friends and neighbors with COVID-19 for the past few weeks encouraging him to get the shot.

“It was just too close to home,” said Lewis, a chef at a downtown Bremerton restaurant, as he was enjoying a stout. “And I don’t want to be the person spreading it.” 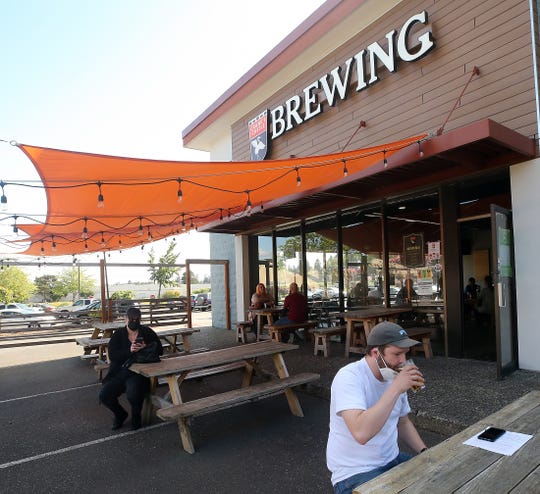 Bremerton’s Levi Irish has a sip of beer after receiving his COVID-19 shot at a pop-up vaccination clinic at Crane’s Castle Brewing in Bremerton on Thursday. (Photo: MEEGAN M. REID / KITSAP SUN)

Lewis wanted to go to a clinic earlier this month but had to cover a shift due to a colleague’s illness. For the obvious reason, he chose the Crane’s Castle pop-up clinic.

“Because there is beer,” he said.

Tony Volante, 49, the maintenance director at Kitsap Mall, said he wanted to get vaccinated now that mask restrictions were eased. “There was also a discount on beer here,” he said as he sipped a Scottish beer.

Josh Farley is a reporter covering the Kitsap Sun military and health care. He can be reached at 360-792-9227, josh.farley@kitsapsun.com, or on Twitter at @joshfarley.

Crane Maintenance May 13, 2021
© Copyright 2021 - All Rights Reserved By Thedailyconstructionnews.com