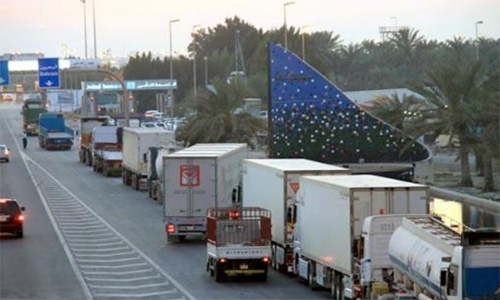 Truck drivers arriving in Bahrain via the King Fahd Causeway can now breathe a sigh of relief. They no longer had to wait in the excruciatingly long lines on the dam, which could take up to 12 hours to clear.

The King Fahd Dam, which was reportedly known for some of the worst traffic jams in the Middle East, had become smoother and faster. In other words, trucks going straight for eviction on the King Fahd Causeway are a thing of the past. The latest data shows that the average waiting time for a truck to reach Bahrain across the dam has fallen to 52 minutes.

Customs clearance in less than an hour is a giant leap for the dam on which truck drivers had to wait more than 12 hours. “This is a great achievement,” said Shaikh Ahmed bin Hamad Al Khalifa compared to previous years.

According to the customs manager, the average waiting time for trucks in the first half of August was 52 minutes compared to 757 minutes earlier. “To this end, the authority has taken several measures in recent years, including agreements with supervisory authorities,” he added.

The release time was successively reduced to 52 minutes from 2014 to 2021 through various measures. He also thanked all relevant authorities, importers, traders and customs officials for the cooperation that made this possible.

Officials, he said, tried to prepare the necessary dates and were given customs duties prior to the arrival of the shipments to ensure the trucks were transported smoothly.

According to reports, the King Fahd Causeway and Tabadul had introduced a new truck management program to reduce waiting times. The system works by allowing trucks to pre-book a slot through Tabadul’s Fasah platform. The system was installed on the dam by the Saudi side in January of this year.