Crane specialist Liebherr has announced that important components for a giant crane to be installed on board OHT’s offshore wind foundation installation vessel Alfa Lift have left Germany and are now on their way to China, where the ship will be built.

The Alfa-Lift, which was built for offshore heavy haulage (OHT) at the China Merchants Heavy Industry (CMHI) shipyard in Jiangsu, China, was floated out of its dry dock on February 28th. After delivery, the semi-submersible heavy installation vessel, designed and built for the installation of the next generation of XXL offshore wind foundations, will work on the world’s largest offshore wind project, Dogger Bank in Great Britain.

OHT announced the float last week and announced that the rotating column and A-frame for the ship’s heavy-duty crane will leave Rostock in early March and arrive in China in April, where they will be installed.

The sailing of these components has now been confirmed by Liebherr.

“On the afternoon of March 7, 2021, the deck cargo ship BigLift Barentsz left the Liebherr location in the port of Rostock with two remarkable, giant crane components that were ready for installation,” Liebherr said on Tuesday.

“The white painted rotating platform and the characteristic A-frame of the upcoming heavy-duty crane HLC 150000 are now on their way to be installed on the next-generation OHT offshore wind foundation vessel Alfa Lift,” added the company.

Upon arrival in China, the slewing platform and A-frame will be the first crane sections to be assembled on the Ulstein-designed Alfa Lift offshore installation vessel.

Photo credit: Liebherr “The tandem lift of the two large components was implemented at the Liebherr location in Rostock with two strong representatives of this type: the LR 11350 crawler crane and the TCC 78000, which once again proves the importance of this high-performance, high-performance rail portal,” said the company and added that the transport ship could begin its journey on the shortest route to the Baltic Sea due to the lifts located directly on the quay.

“The rotating platform and A-frame will be assembled on the Alfa Lift at the China Merchants Heavy Industry (CMHI) shipyard in Jiangsu Province near Shanghai. When the installation of the two components is complete, the boom will be delivered just-in -Time to complete the HLC 150000, “added the company.

“The crane cannot be assembled and installed until the ship has reached a certain construction phase. That is why the production times between Liebherr, OHT and CHMI are precisely coordinated, ”said Gregor Levold, sales manager for ship and offshore cranes at Liebherr Rostock. “Another important element of the partnership with OHT is our support and guidance during the initial installation of the crane on board the Alfa Lift.

Liebherr will also send a team of specialists to China and support the project by monitoring the installation, commissioning and testing process (ICT) of the HLC 150000 at the shipyard. 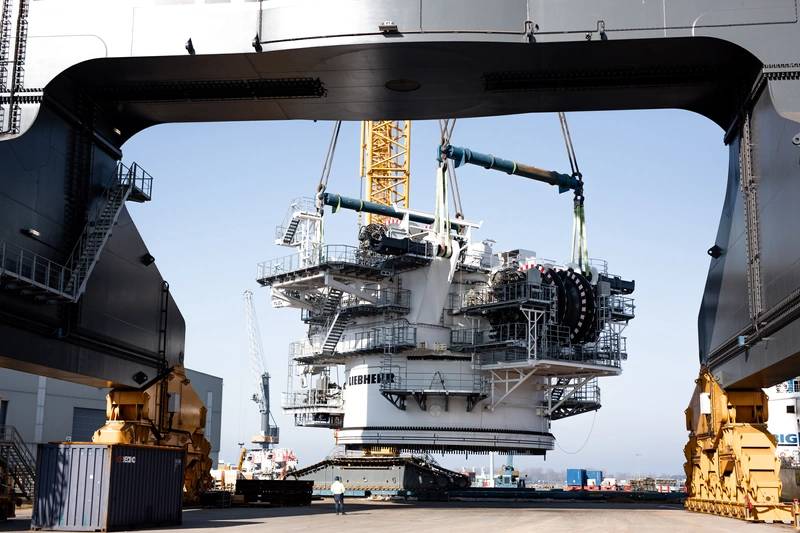 Photo credit: Liebherr According to Liebherr, the HLC 150000 crane has been optimized for future wind farm systems with a maximum load capacity of 3,000 tonnes at 30 meters and 1,000 tonnes at a reach of 76 meters.

“In general, the design of the Liebherr HLC series is characterized by a small footprint. The pivot bearing diameter of the HLC 150000 is only 14 meters, so the crane requires little space on deck and offers more storage space,” explains Liebherr.

Due to the special slip ring configuration, the HLC has an unlimited swivel range of 360 degrees. In addition, the foldable A-frame of the Liebherr HLC reduces the height of the crane as required, says Liebherr.

“In contrast to many other crane ships of this size, the Alfa Lift can navigate in waters crossed by bridges. This function shortens the transit time, for example when the ship enters the Baltic Sea via the Storebaltsbroen in Denmark, ”said Gregor Levold.

“The foldable A-frame offers more flexibility, which in turn leads to operational and cost efficiency and increases the number of charter days and ship availability.”

For faster maintenance during operation, all components of the HLC are accessible via stairs and platforms.

“A key element of the maintenance concept is the integrated telescopic kingpin crane, which can lift up to six tons. This service crane enables the heaviest individual components to be replaced without the aid of an external crane,” says Liebherr.

This means that convenient, quick and economical maintenance is guaranteed regardless of the location of the ship. Great interest in shaping the energy turnaround The Liebherr heavy-duty crane series serves a growing global market for offshore wind turbines and contributes to a sustainable energy supply. 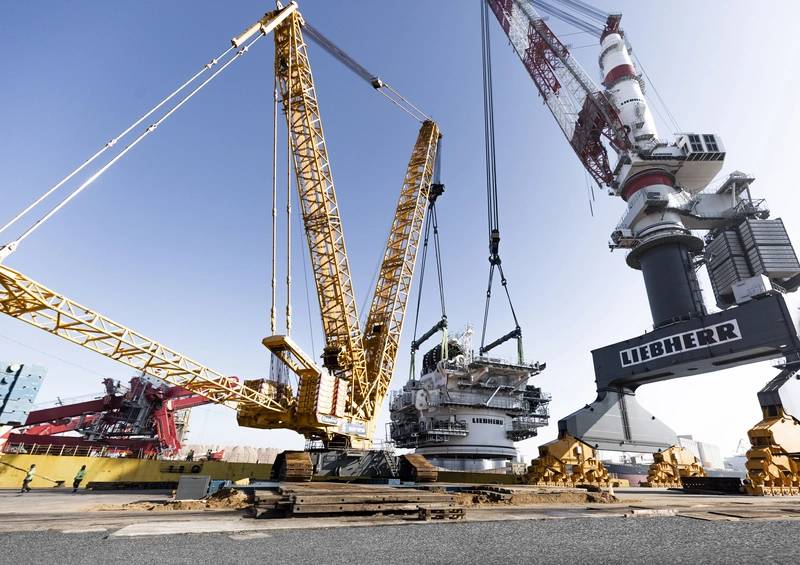 Weld failure brought on 2019 collapse of Halifax crane throughout storm,...