The upper part of the crane tower on the Olymp building in October 2019. – Photo: Communications Nova Scotia

The crane, which fell over a Halifax building in the wind of post-tropical Storm Dorian, damaging several buildings, evacuating residents and blocking a busy street for two months, collapsed due to a “welding failure”, according to a provincial government investigation.

The Department of Labor and Education released the report in its investigation Thursday afternoon as a highly anticipated press conference began on new restrictions due to COVID-19.

The 73 meter tall crane was manufactured by the Manitowoc Company, owned by Lead Structural Formwork Ltd., and erected in the Brenton Suites development by Wadih Fares. It collapsed on September 7, 2019 at the height of the post-tropical storm around 4 p.m.

It hit the corner of the Trillium condominium building and fell over a building under construction in South Park known as the Olympus Building and partially onto the street below. No one was injured, but there is a proposed class action lawsuit in the courts calling the developer, and the manufacturer and owner of the crane, on behalf of companies that have suffered losses. 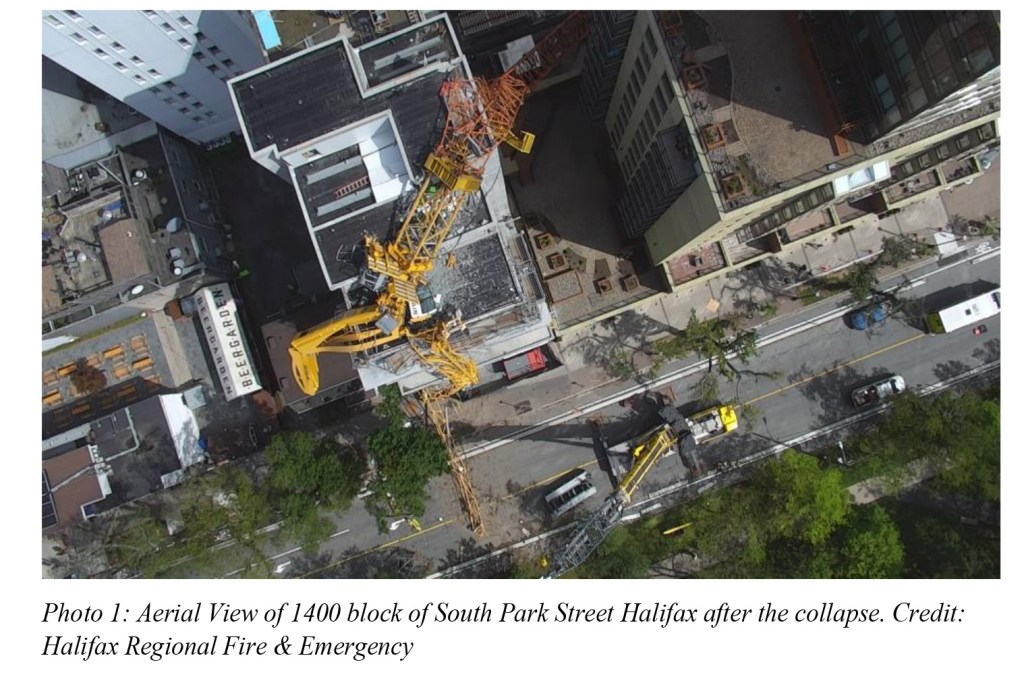 In an interview at the time, Fares said, “The crane shouldn’t collapse. however it did. “

The winds at the time of the collapse were between 97 and 107 km / h, according to the provincial report. Tower cranes like this one are supposed to withstand wind speeds of up to 160 km / h, the report says, and the workers on the construction site had prepared the crane for the weather.

“The rigging was unhooked, the block was raised to the highest position, the cart was locked, the rotary brake was released manually and the counter jib was checked for unsecured objects,” the report said.

“The crane was put into weather spring mode by the computer and confirmed that it would fly properly.”

A few months before the collapse in June 2019, the crane was not properly protected from the weather:

On June 4, 2019, the general contractor informed the safety department that the turntable at the top of the tower crane had got stuck to prevent it from becoming “weatherproof” in the event of wind loads. Weather catcher is the crane’s ability to rotate freely in the wind when not in use. This is to reduce the impact of the wind on the structure. The general contractor indicated that the upper part of the crane, consisting of the cabin, turntable and boom, should be repaired or replaced as soon as possible in order to remedy the inability to use the weather vane. 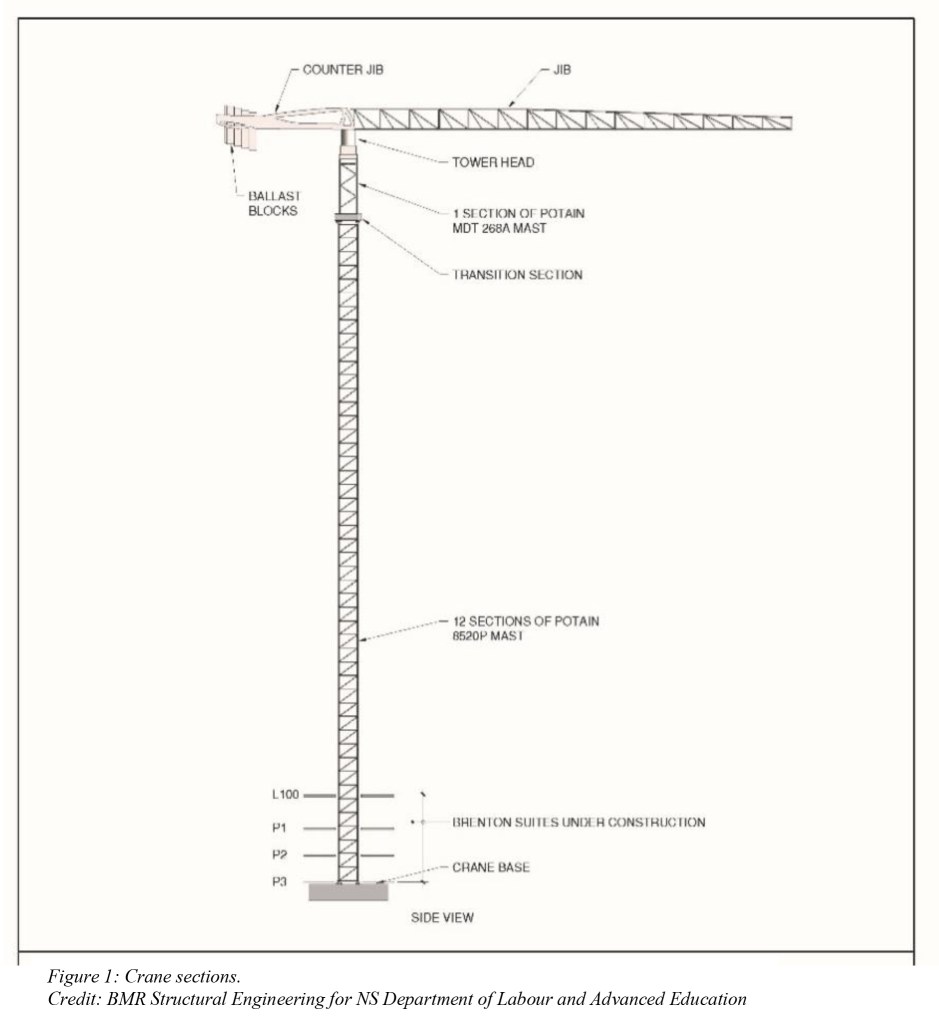 This work has been performed, designed, tested, approved and certified. None of the new components contributed to the breakdown.

Investigation into the collapse began the day after, September 8th, and by September 12th it was considered safe to inspect the base of the crane under development on Brenton Street.

“A possible point of failure was originally identified in a lower mast section at the northwest corner of the crane tower (later referred to as Section 2) where a hollow diagonal tube had been welded together by a solid vertical post at what it had been before (Fig. 2) “, it says in the report. 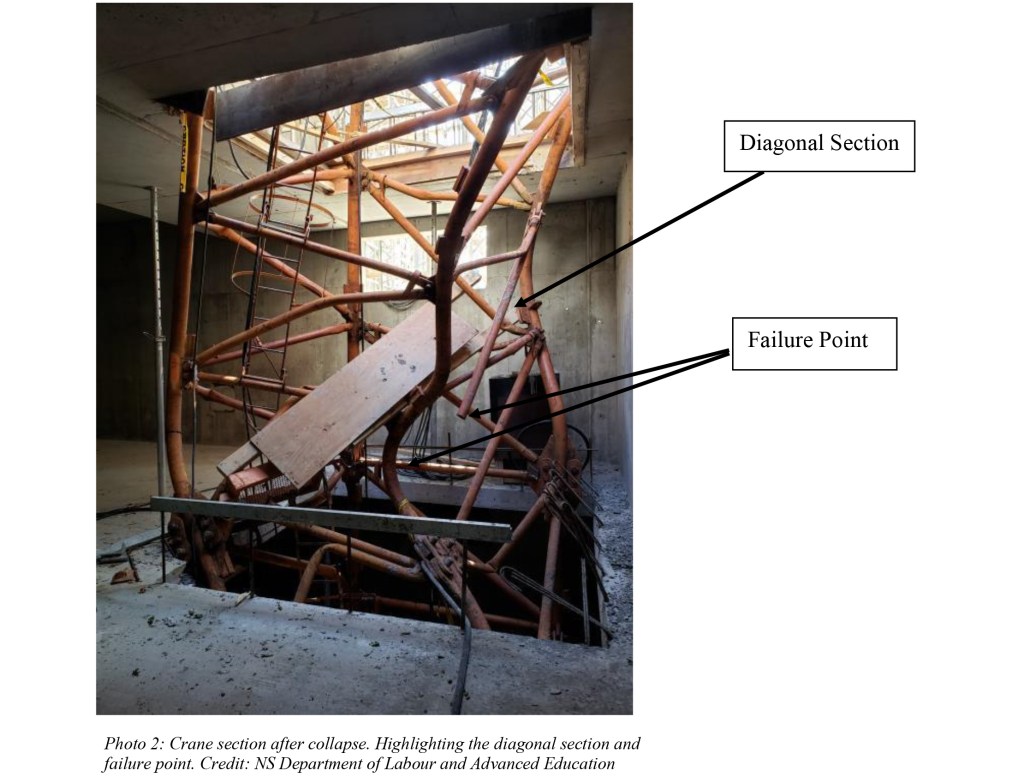 The province hired a contractor, BMR Structural Engineering, to review the crane and confirm the area where it had failed.

“The boom, the upper mast, the transition piece and the mast sections directly under the transition piece were undamaged. Based on their investigation and other information gathered by inspectors, including videos taken immediately prior to the incident, the engineer determined that prior to the incident, there were no structural failures in the sections above, ”it said Report.

“The bolts in the crane base were undamaged, which indicates that this did not contribute to the failure. The engineer’s report concluded that the crane collapse was the result of the failure in the second section of the mast about 6 to 9 feet above the base (initially identified by the inspectors in Figure 3). “ 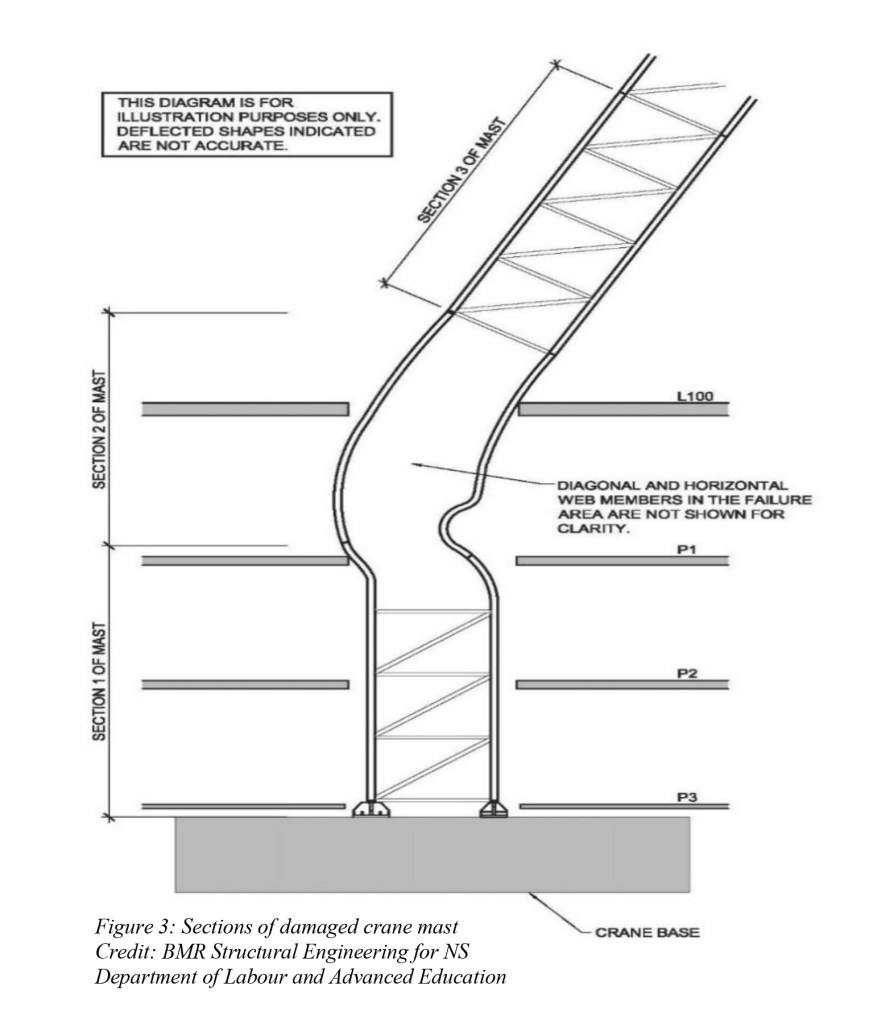 In October 2019, the province commissioned the crane’s owner, Lead Structural Formwork Ltd., to “carry out a metallurgical assessment of the diagonal strut and the knot as a defect and an assessment of the turntable”.

There was a delay in the results of this assessment due to COVID-19, but the province received it in August 2020, “indicating a lack of fusion, corrosion, pores and a crack that spread from the inside diameter to the outside the weld surface. Other weld defects on other welded joints were also mentioned in the report. “

In September 2020, the province received another report evaluating the crane’s turntable, which had been seized and replaced in June 2019, stating that “prior to the crane’s collapse, no defect or anomaly would have occurred or contributed to the collapse . ”

The investigation revealed that the crane had passed all the proper inspections, although it was found that “the crane operator’s logbook did not document the daily inspections from August 15, 2019 to September 6, 2019”.

The operator was issued a two-day ban and the owner was fined $ 500. “However, it was determined that the failure to complete the log was a defect, but did not contribute to the crane’s collapse.”

In summary, the report states that the crane “collapsed as a result of the failure of a weld where a diagonal pipe was connected to a vertical element of the crane mast between 6 and 9 meters from the base.

“The welding failure caused the diagonal tube to detach from the vertical member of the mast, transferring the weight carried by the mast’s 4 vertical posts to only 3 of its posts, causing the tower section to rotate and fail, resulting in the complete collapse of the crane .

“The investigation found that the owner and operator of a tower crane is in compliance with applicable legal and regulatory requirements to prevent this event from occurring and that no further regulatory action will be taken in relation to the crane’s collapse.”

The department plans to meet with crane owners and operators to review the results. It will also require “structurally critical welds in the masts and jibs of all tower cranes in Nova Scotia that are immediately and thoroughly cleaned to visually inspect the welds, perform non-destructive tests on welds that have been found necessary and any defects, that of a person according to the regulations or standards. “

There are also plans to “develop and implement an industry leading code of conduct or standard for the inspection, testing and maintenance of welds and booms on tower crane masts and booms in Nova Scotia”.

Some people have asked that we allow additional one-time donations from readers. That’s why we created this option using the PayPal button below. We also accept electronic transfers, checks, and credit card donations. Please contact iris “at” halifaxexaminer “dot” ca for details.

Earlier than Speccing Service or Crane Vans Contemplate These 16 Questions