While electric cars, bicycles, and scooters can be an everyday staple for an urban environment to help reduce greenhouse gas emissions (greenhouse gases), long-haul trucks are an often overlooked contribution.

According to the indicator assessment of the European Environment Agency (EEA), GHGs in road traffic will increase by 32% by 2030 compared to the marker values ​​of 1990, even with existing measures. Long-distance journeys on motorways (> 310 miles) are almost exclusively made by diesel-powered trucks, especially those that connect ports and airports with distribution centers.

A graph of US CO2 emissions by transportation and vehicle type. Image courtesy of the EPA [data] and Fleming et al

As the world moves towards greener technologies, e-highways or electrified highways are a possible solution to support long-haul trucks.

This article examines what exactly an e-highway is, who pioneered this technology, and what they have done so far to electrify long-distance roads.

Typical of what makes a general freeway an e-highway is the use of an overhead contact line system that provides heavy duty vehicles with power to travel long miles without stopping to connect to charging stations. Instead of building a heavy electric vehicle from scratch, e-highways would leverage existing road infrastructure and turn any heavy truck into a proposed plug-and-play electric vehicle.

With the support of major global players like Cisco System Inc., Huawei Technologies Co. Ltd., Honeywell International Inc., AT&T Inc., IBM Corporation, Schneider Electric SE and others, e-Highways are hoping to gain speed and gain trucking Electrification to the next level sooner rather than later. Despite the interest and support from companies, e-highways are facing some challenges.

To create an e-highway, it takes much more than connecting trucks with combustion engines to an overhead contact line infrastructure.

An example of an e-highway system. Image courtesy of Siemens and the California Energy Commission

The adaptation to an intelligent electrified system requires further development in:

At first glance at the system of an e-highway, one might think that the electrification system is similar to that of conventional cable cars; however, it is not identical. It takes innovation to take it to the next level beyond cable cars or trolleys.

To achieve exactly that, two German companies, Siemens Mobility, in collaboration with Continental Engineering Services (CES) and Traton, are investing heavily in preparing the technology and infrastructure to redesign the everyday product transport via e-highways.

The future of road freight transport realized by these companies resembles historical trolley systems in many respects, at least from a distance; However, the rails are missing. To take the next step towards integration, Siemens and Traton have a unique, intelligent pantograph system for electrification.

Let’s first take a look at the solutions from Siemens Mobility. Siemens recently hoped to leverage its rail electrification experience. At the same time, CES intends to provide automotive capacity so that the companies can work in partnership to cover the most frequently used 4,000 km (approx. 2,485 miles) of Germany’s 13,000 km long motorway infrastructure with an overhead line network.

Siemens’ “trolley” trucks will have an intelligent pantograph equipped with sensors that enable the device to extend, retract and “hover” above the ground at speeds of up to 90 km / h is connected to the overhead line. 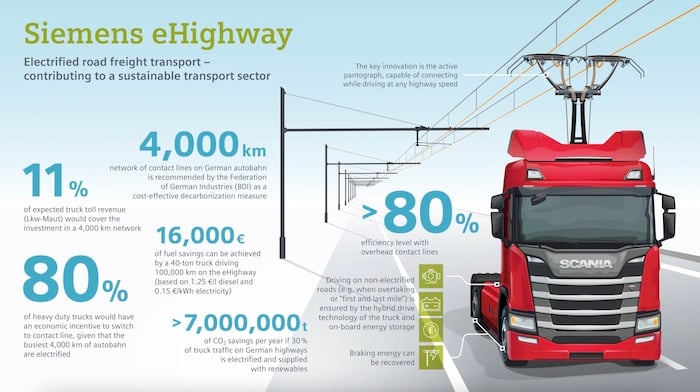 Infographic on the Siemens e-Highway plan. Image courtesy of Siemens

The decades of successful use of trams and the relatively low cost of building the infrastructure can cover the busiest kilometers of motorway and optimize the efficiency of such systems by up to 80%.

In contrast to pantographs, which are used in overhead contact line cars and opencast mines, which are limited by their proximity to overhead lines, these devices are mounted in such a way that they extend the system at high speed and make it functional and can be put away when not in use.

Trucks can exchange electricity as they drive past in uphill or downhill sections and feed the braking power back into the e-Highway system or the power grid. They could be powered by a combination of an electric battery or hydrogen cell and a combustible engine system, or they could be fully electric for use on normal non-electrified roads.

Smart pantographs are a technological milestone that can be roof mounted on other vehicles, including buses, and provide an additional way to reduce the greenhouse gases generated by multi-passenger vehicles.

Another solution comes from Traton. Traton’s e-Highway, which is currently running on a route near Frankfurt am Main, is still in the test phase.

However, the first results of the effect on reducing CO2 emissions are encouraging. If the project progresses as planned until 2022, hybrid trucks will drive in one lane on the A5 motorway between the cities of Frankfurt and Darmstadt, while the other vehicles will use additional lanes. Trucks would have a sufficiently charged battery to enable successful overtaking while the pantograph system steps out and back into the grid. 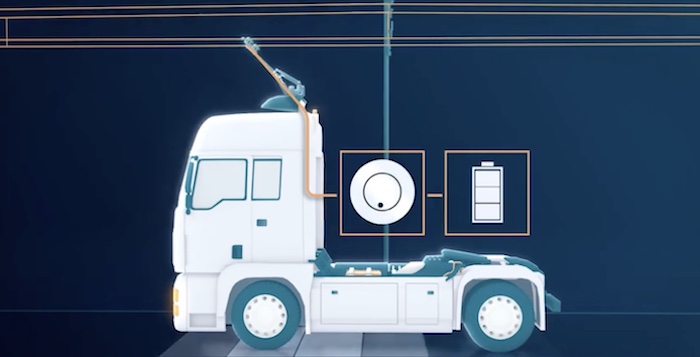 The pantograph system can be extended and retracted for loading. Screenshot courtesy of Traton

Motivated by the success of the Swedish Scania truck used in the test, Sweden also wants to implement e-highways locally and expand the truck trolley network beyond German borders.

Can we see massive electrification of the freeways soon?

The convenience of cleaner, safer, and quieter trolley systems is becoming increasingly popular as fossil fuels take a back seat. Electrified highways complement other low-carbon modes of transport and fit into the transition period without significantly disrupting current highway infrastructure and regulations.

Pantographs used to be quite limited in their design; however, intelligent mechatronics has helped many devices reduce structural vibrations and improve stability and serviceability.

Intelligent pantographs are already being used in train systems across Europe as a cost-effective diagnostic kit to maintain and prevent errors; they could also enable the creation of lightweight power and monitoring systems for e-highways.

However, hybrid trucks inevitably cost much more than conventional fossil fuel trucks. Even if the overhead line network is placed as planned, the main question that arises is: How many truck drivers buy the vehicles or the batteries in order to use them.

Even if the e-highway goal is far-reaching and not in the near future, it will be interesting to see whether other solutions and technologies emerge or whether this solution can actually take off in the USA.

The Newest in Truck Crane Know-how

9 killed as crane collapses in Nairobi