Firefighters are coordinating efforts to extract the bodies of the victims of a crane accident at the SUKE highway construction site in Kuala Lumpur. (Bernama picture)

PETALING JAYA: The Kuala Lumpur Fire Department says stabilization work is in progress to rescue the victims of a victim caught by a girder crane who collapsed yesterday at the construction site of the Sungai Besi-Ulu Klang High Speed ​​Expressway (SUKE) in Kuala Lumpur is.

Rescue operations leader Khairul Azuwan Ibrahim said they were working to stabilize the construction beams before they could raise the crane that trapped the victims underneath.

Three workers died after the girder crane overturned and crushed a car yesterday morning at the construction site near the Puncak Banyan Condominium in Cheras.

The fire department said the driver of the car was seriously injured when steel from the crane crushed the vehicle.

The three workers were confirmed dead at the scene, two of them fell from a height of 36.5 m onto the street and the third worker got stuck on the scaffolding. 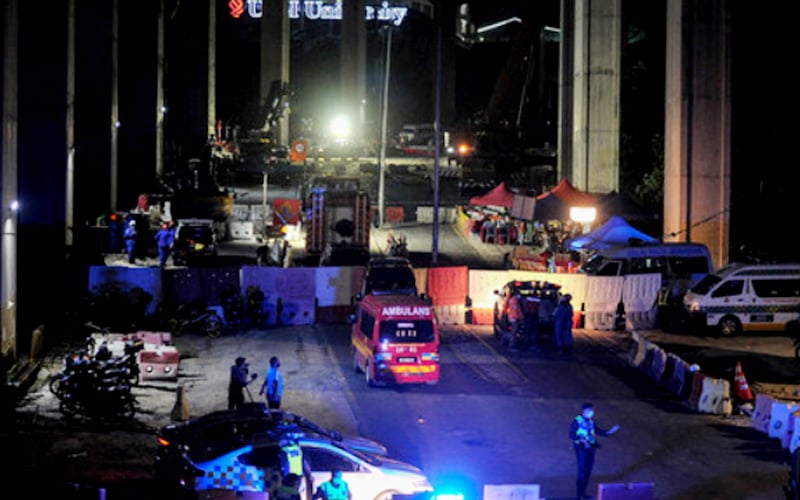 A work interruption order has been issued to allow an investigation into the incident. (Bernama picture)

In the meantime, Operations Minister Fadillah Yusof said the order had been given to stop construction and maintenance work there immediately.

He said the work interruption order was issued to allow an investigation into the incident.

Fadillah said various agencies, including the Construction Industry Development Board, the Malaysian Highway Authority and the fire department, were evaluating new safety proposals before construction could continue on the site.