The crane collapse, which killed four people in Seattle’s South Lake Union neighborhood in April, happened because three companies were failing to follow critical safety procedures for dismantling the crane, according to an investigation by the Washington State Department of Labor & Industries.

At a news conference Thursday, officials said the companies failed to adhere to procedures set by the manufacturer when they began dismantling the crane, including prematurely removing almost all of the pins and sleeves holding the crane together. According to the agency, after the pins were removed, the tower was “significantly weakened, making it vulnerable to the gust of wind of over 45 km / h that knocked it over”.

The accident at Seattle’s booming tech center happened on April 27 as construction progressed on the new Google campus along Mercer Street. Parts of the heavy crane smashed the roof and facade of a Google Cloud building and fell on the street below, landing on vehicles near the corner of Mercer and Fairview Avenues.

Sarah Wong, 19, a freshman at Seattle Pacific University, and Alan Justad, 71, a longtime City of Seattle employee, were killed in cars hit by falling debris. Justad, who retired in 2014, was the former deputy director of the Department of Planning and Development.

Four more were injured. Pictures and videos tweeted and televised at the time of the accident captured the devastating scene. 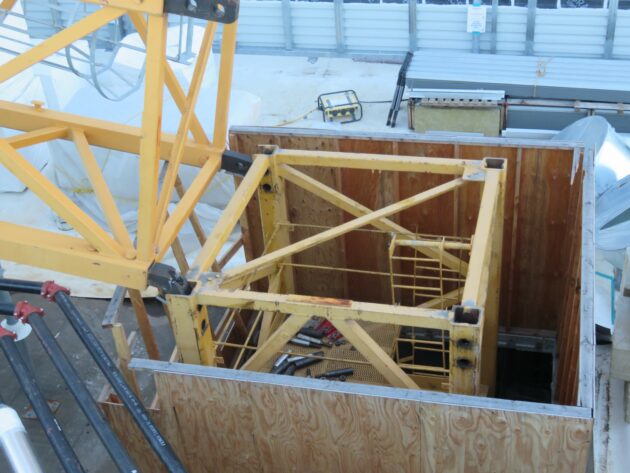 The tower crane is shown after it collapsed, with the pins removed before they should. (Photo via L&I) 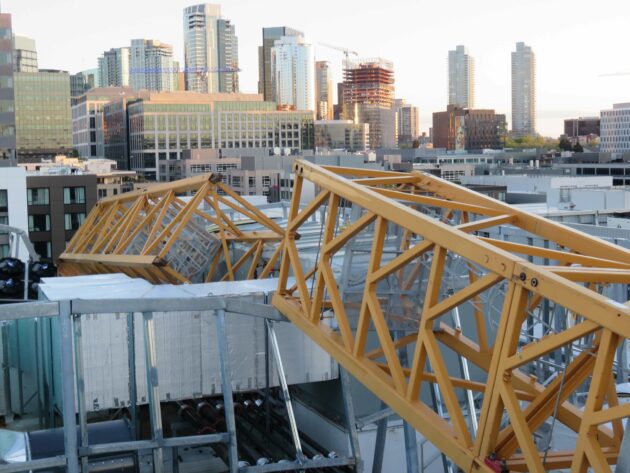 After the collapse, the crane lies on the roof of the Google building. (Photo via L&I)

Two other companies, Seaburg Construction and Omega Rigging and Machinery, were not cited for violations. The fined employers have 15 working days to appeal the subpoenas.

GLY said in a statement at the time of the accident that it was “deeply saddened and heartbroken about what happened on our construction site,” adding that the company and its subcontractors would work fully with investigators and local authorities. 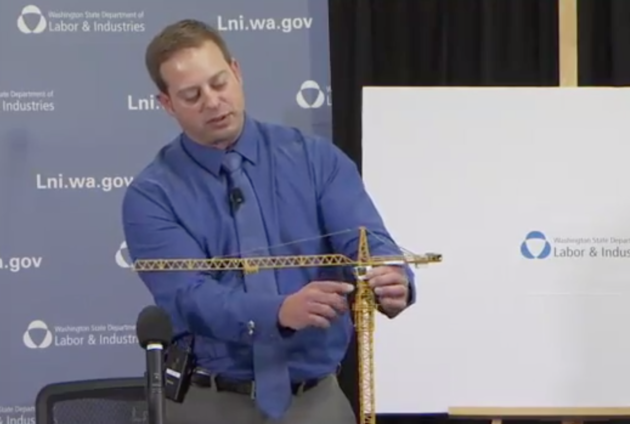 L&I Crane Program Manager Brian Haight said Thursday that the removal of up to 50 bolts from the tower before a mobile crane could be attached to any components of the structure was likely in an effort to expedite dismantling.

“It is not acceptable to remove pins until the mobile crane is in place,” Haight said, adding that the gust of wind that hit the tower was placing too much stress on the crane’s components.

Although the wind was a key factor in the collapse, Haight said the industry investigation and conversation revealed a lack of safety measures at other tower crane locations. Removing the pins during disassembly is “not necessarily a common practice,” said Haight, but it has happened “in more than just this case.”

The agency said it has taken steps to increase crane safety and prevent similar incidents from occurring in the future. L & I’s Department of Occupational Health and Safety (DOSH) has issued a hazard warning highlighting the proper procedures for assembling and disassembling tower cranes. Crane companies must follow manufacturers’ procedures, the agency stressed, and pins and other connectors should only be removed for the individual crane segment that is being lifted.

DOSH has also asked companies to get in touch when installing or dismantling tower cranes. 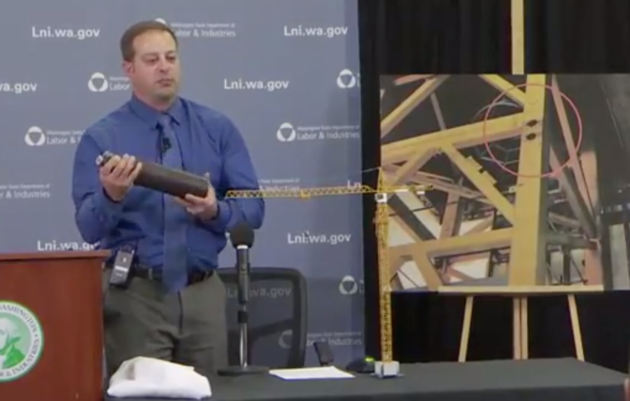 Brian Haight, program manager at L&I Crane, holds a pen showing how it was removed from the collapsed tower crane. (Facebook screen capture)

“Tower cranes are safe when the manufacturer’s procedures are followed during erection and dismantling and our rules are followed,” said Anne Soiza, L&I deputy director. “Employers and contractors are responsible for occupational health and safety. We can’t be everywhere. “

Google officially opened the first portion of its new five-building campus in SLU on October 3, right across from Amazon’s massive neighborhood presence. The tech giant added 600,000 square feet of real estate to its Seattle area. The offices will employ teams working on projects like Google Cloud, Android, Maps, and Chrome. The second phase of the campus will open on October 21.

The South Lake Union campus was designed by Vulcan and will include retail and residential units on the ground floor in addition to the offices. 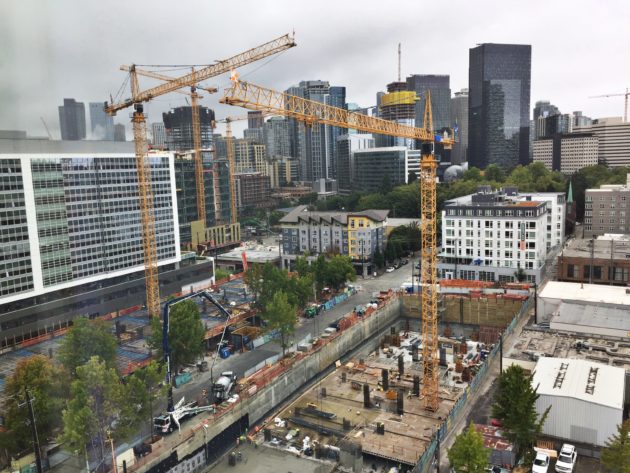 Seattle has long been a leader in the number of cranes on its skyline compared to other US cities. The growth, driven in part by the area’s tech industry, has contributed to the ubiquitous website – and the oft-heard nickname “Crane City”.

Engineering and construction workers and others in South Lake Union reacted grimly shortly after the accident in April. For some, the presence of so many cranes is part of living and working in the growing city.

“There are cranes everywhere and it makes you a little nervous to see them so high,” Colin Hall, a scientist at Novo Nordisk, told Google. “This is a new city for Seattle when you see how it all comes together. Cranes are one of them. “

Watch the L&I press conference on this Facebook link.

Why the U.S. Will not Regulate Vans and SUVs

After COVID, greatest menace to crane business is lack of expertise...