Due to the fire at the Glenmore Road and Union Avenue construction site earlier this week, an evacuation order for homes in the immediate vicinity was issued due to structural concerns from a crane.

At around 6 p.m. on Wednesday evening, a local emergency and evacuation order was issued for properties within 300 feet of the construction site.

“We’re working with the City of Kelowna, Emergency Management BC, Worksafe BC, the Kelowna Fire Department, and professional engineers to assess risk, determine the structural integrity of the crane, and resolve the situation as quickly as possible,” said Sandra Follack The Central Okanagan Regional District Emergency Scheme Coordinator said in a press release.

“Public safety is our top priority and we are working with the utmost caution to ensure the safety of our residents.”

Although the fire has been extinguished, the crane that remains on the construction site poses a potential structural risk. At this point it is not clear if it has been damaged.

Properties affected by the evacuation order include:

Both sidewalks in Glenmore between Cross and Scenic are closed to pedestrian traffic, as are sidewalks in Union between Glenmore Road and Snowsell Street North.

These closures and detours will remain in effect until further notice and are indicated by signs.

“To ensure public safety, we urge the public to avoid restricted areas on and along Glenmore Road and to obey road and sidewalk closures, signs and detours,” said Lance Kayfish, Kelowna City Risk Manager.

“Further details and information will be provided as they become available.” 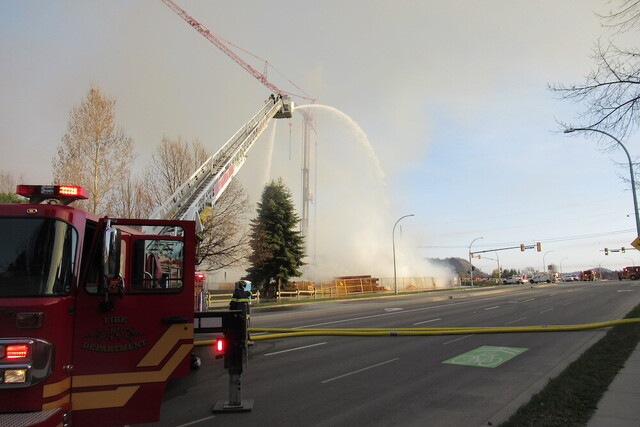 Hiab to produce 37 loader cranes in Spain to keep up...

Truck Cranes Market is predicted to generate roughly US$ 670 million...