Germany-based company Enercon has built two self-climbing LCC140 cranes, each of which can be used to install turbine models of its latest EP3 and EP5 platforms – including the latest E-160 EP5 E2 and the upcoming flagship E-160 EP5 E3 with the new one E-nacelle This will be the company’s most powerful offering at 5.56 MW (see section E-160 EP5 below).

Each LCC140 crane has a lifting capacity of 140 tons “under the hook” – without the weight of the hook and cables of the device. An LCC140 crane was used to install the first of three E-136 EP5 turbines on a project in the Dutch port of Eemshaven.

“After successfully completing this full test installation process, which included all of the tower segments, nacelle stern, generator, hub and blades, the same crane will be used again to install the second turbine, while the other LCC140 will be the third turbine on this project Installed.” Henriksen says. “All three are equipped with a hub height of 132 meters and are combined as standard with our specially developed, bolted modular steel towers (MSTs). This is a key feature of this fully integrated concept.”

The next job for the self-climbing LCC140 cranes is a wind farm with 21 turbines and E-136 turbines in the same coastal region in Eemshaven. In this case, 16 of the turbines – all with a hub height of 155 meters – will be installed with LCC140 cranes, the rest with conventional crawler cranes.

The first conceptual ideas for this clever, innovative self-climbing crane concept come from the former Dutch wind pioneer Lagerwey and developed into the first LCC60 product development in 2015/16. The crane was developed taking into account the 2-2.6 MW LP2 series by Lagerwey, in particular the volume model L100-2.5 MW. As with the LCC140, the number in the name refers to the maximum lifting capacity of 60 tons below the hook.

“Our small core team developed the LCC60 together with three external companies, including a mechanical design company,” explains Henriksen. “A key feature of the system is that this self-climbing crane is supplied in a standard combination with the bolted modular steel tower (MST).

“To prove both the main principle and the concept, we installed a full LP2 turbine that includes all of the tower segments, the nacelle stern, the generator, the hub and the blades,” he adds.

The Dutch supplier carried out a second proof-of-concept installation attempt in spring 2017, this time with the latest 4.0-4.5 MW LP4 prototype in Eemshaven. Since the mass of the direct drive LP4 generator far exceeded the maximum lifting capacity of the LCC60, this essential part of the prototype installation process had to be carried out with a conventional crawler crane.

Enercon acquired Lagerwey and all of its intellectual property, including the patented LCC60 concept, in late 2017. Development of the improved LCC140 (see “Perfect Harmony” below) began in 2019 under the wings of the new owner and was made possible by extensive resources.

Most of the other LP2 turbines, now a phased-out platform, were destined for Russia and were placed on standard tubular steel towers. These more than 100 turbines were manufactured in Enercon plants and only installed in the last few years.

The next operation planned for the LCC60 crane is a three-turbine project with limited space in Eemshaven. 2.5 MW L100-2.5 MW turbines will be installed on the Oostpolderdijk flood protection with a view of the Ems in the German-Dutch border area.

“We have also found that LCC technology has particular advantages in complex locations,” says Henriksen. “One of the three E-136 Eemshaven locations had limited installation space and was, for example, near a roundabout and access roads. If we had used a conventional crawler crane, the roundabout and the access roads would have to be closed to traffic for the entire installation time.”

Lifting the blades is the most critical process for any crane because, according to Henriksen, it has the longest lifting distance measured from the center of the tower. In addition, a bucket always creates buoyancy, as a result of which the aerodynamic load center is inherently out of balance with the center of gravity of the bucket. This causes the blade to move up and down continuously while it hangs under the crane girder. 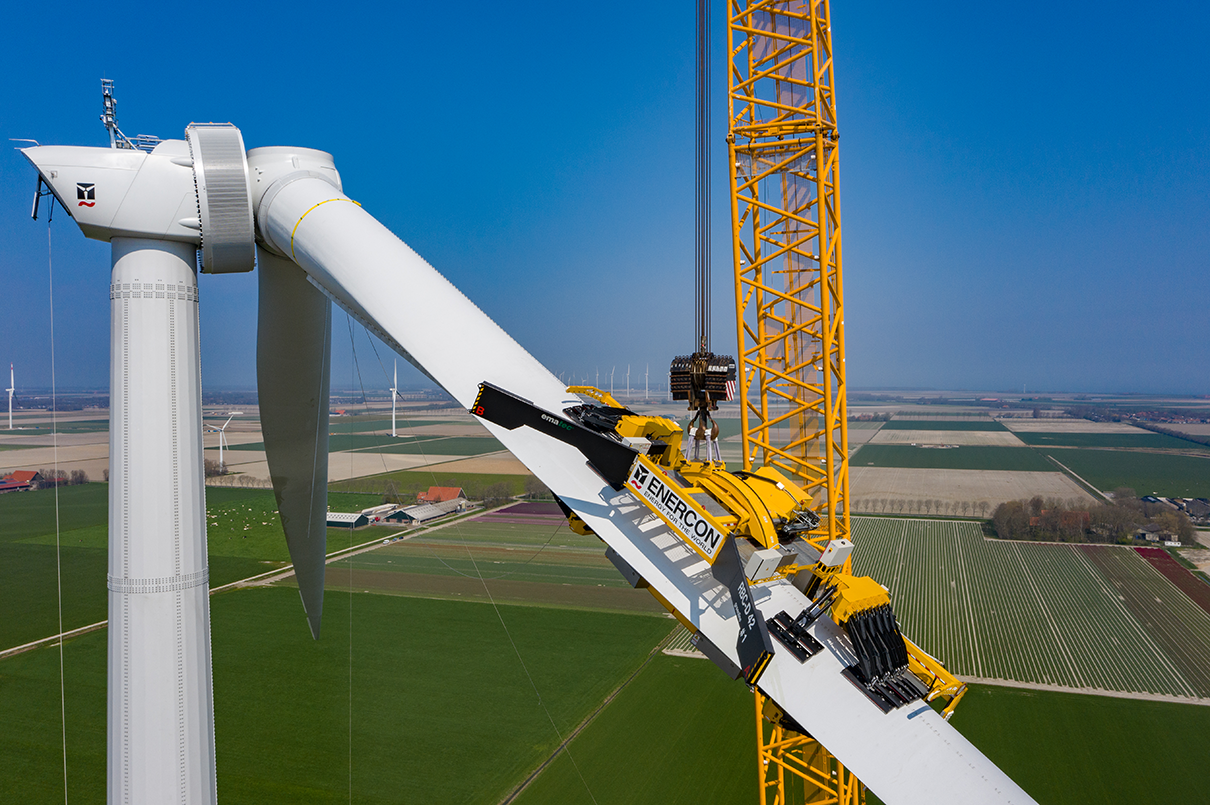 Enercon believes that the LCC’s ability to lift blades (left) is one of its strengths in reducing installation time and costs compared to conventional cranes (right) (Photos: Klaas Eissens).

“The key lessons learned from turbine installations using the LCC60 and LCC140 models are the right balance between the lowest additional cost for crane attachment points (see Perfect Harmony section below) and the maximum benefits of the self-ascending crane. These holes in the parts made in the tower walls must be double-sided with steel plates Reinforced to restore the original strength and maintain the certified (fatigue) life of the tower, for example, the additional investment for crane points with the LP2 series MSTs turned out to be too high.

“Less waiting times for lifting knives are the greatest time savings when providing the LCC140. Depending on the project-specific circumstances, however, many other variables have to be taken into account,” he explains.

The goal of the LCC design was never to compete against traditional cranes under all circumstances, adds Henriksen. Rather, the team worked with two specific key development drivers. The first is to get the maximum benefit from locations that are not suitable for normal cranes. The second is to actively anticipate future trends, as the hub heights – now already in the range of over 150 to 160 meters – continue to rise and the operating costs for conventional cranes rise to an excessive level. Henriksen believes that the LCC concept could be expanded further.

“Another major challenge is to work towards an even higher level of system integration throughout the entire construction process of the wind project. Another is to further optimize the cost-critical connection between crane and tower and, as part of this process, continuously evaluate the price for the Additional services, “he concludes. 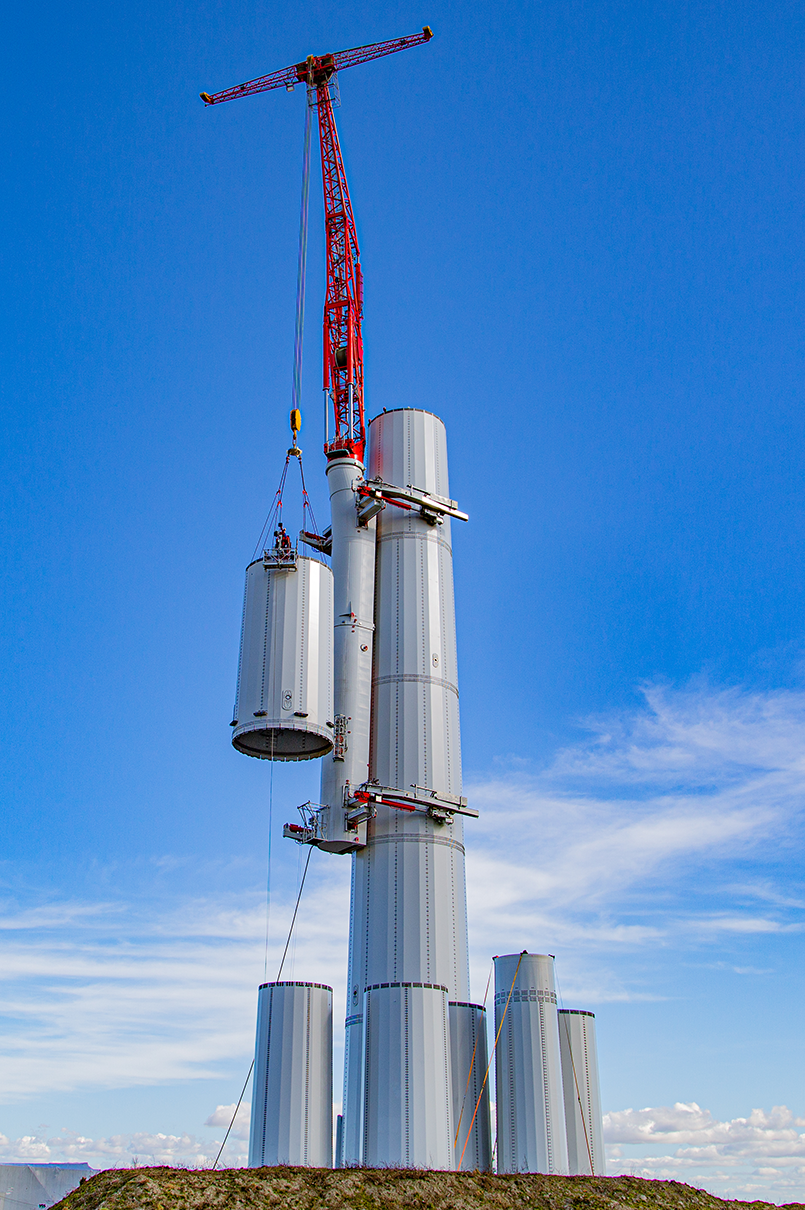 All Enercon modular steel towers (MSTs) with a wide base consist of pre-bent conical steel sheets, each 2.8 x 12 meters in size, about 20 mm thick and already precision-cut holes for the vertical and horizontal bolt connections. The assembly process begins by screwing these individual elements together in tapering full-circle sections, with the section diameter decreasing with height.

A key feature of the combined tower crane system is that all individual MST sections contain three levels with large pre-cut holes in the shell floor area for LCC60 / LCC140 assembly.
On each level, these holes are located at -90 degrees, neutral, and +90 degrees around the perimeter. The position relative to the main axis of the main body is neutral.

A total of six holes – three at each height – serve as attachment points for climbing cranes and are therefore structurally reinforced in both places with steel plates. Two additional stiffening beams connect the central (neutral) hole, with holes two and three together forming a V-shape that provides additional structural strength and optimal load transfer between tower and crane.

At the beginning of each full turbine installation process, a small crane installs the first three MST subsections, creating a launch platform for the self-climbing crane.

To get all the components for a complete LCC140 crane system to a construction site, 11 road transports are required, including one with a total load of 80 tons. Like the smaller LCC60, the LCC140 is also designed according to European standards.

The approximately 30 meter long central main body contains four hydraulically operated side “gripping arms” in two separate vertical planes with a distance of approximately 24 meters. This distance is the distance of two complete MST sections, but is actually divided into three sections. 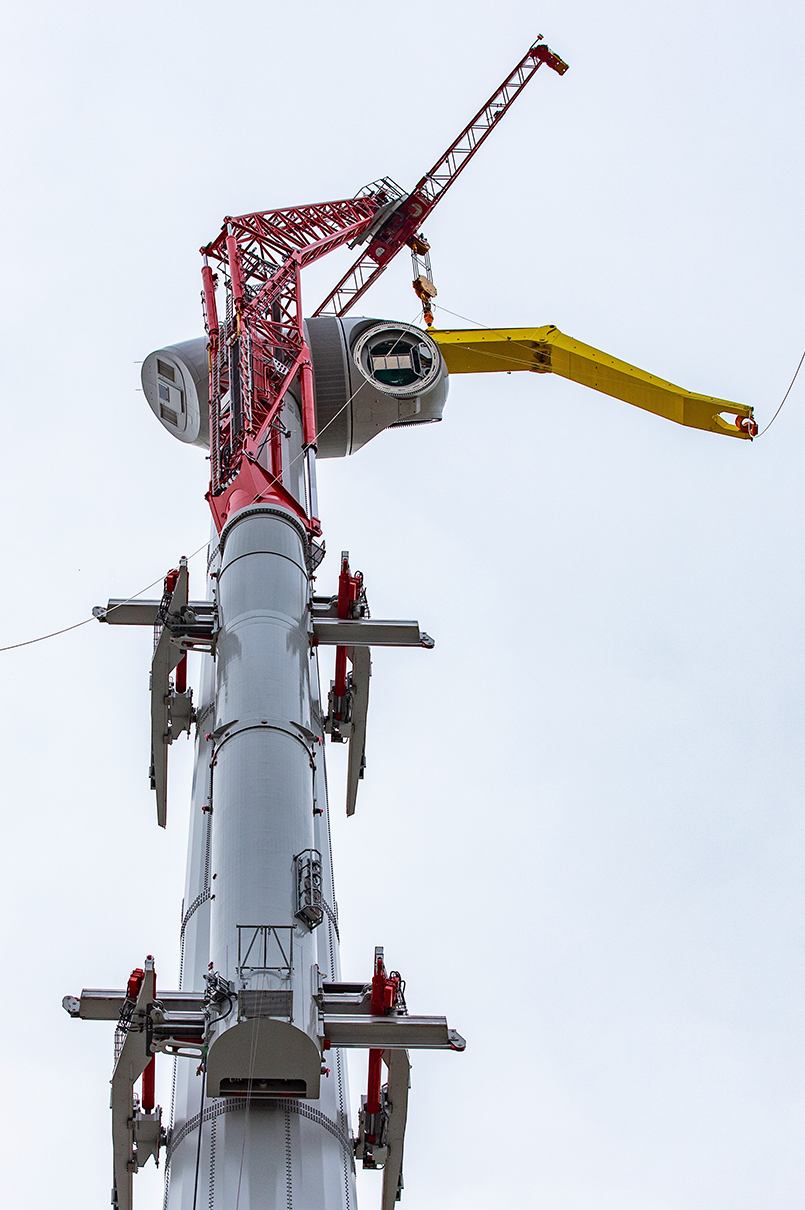 During a lifting process, all four gripper arms and central attachment points between the crane body and tower are closed and locked. When the crane is moved to the next installation position, the side grapple arms are released before the central body moves up a tower section made possible by another hydraulic system.

The rotation of the “split” lattice crane boom on the upper crane body is made possible by several slewing motors. New for the LCC140 is an integrated horizontal walking beam for installation with a leaf, which is mounted above the crane hook and can actively rotate around its central axis.

The LCC60 and LCC140 lifting operations are controlled remotely from the ground with the help of cameras that are installed at important positions on the crane. Many built-in safety functions determine when a lifting process can begin.

The prototype E-160 EP5 marks the progress towards rapid commercialization 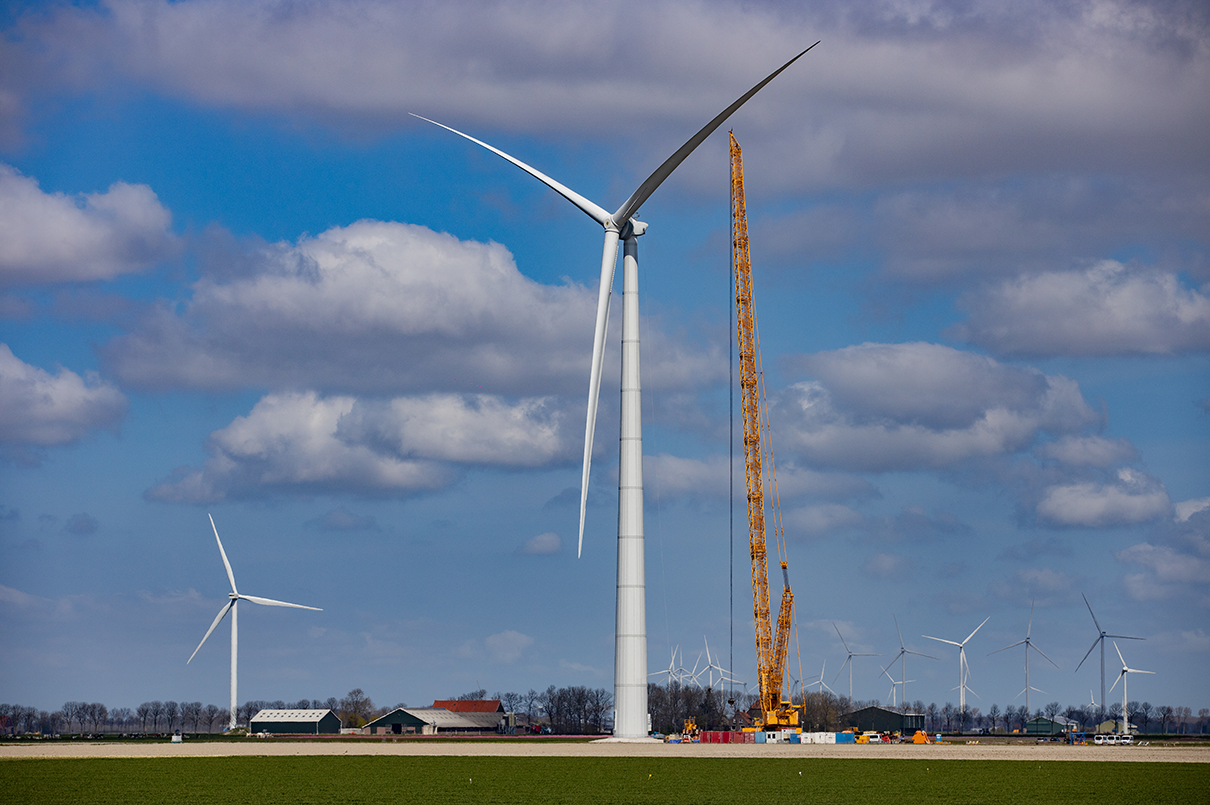 The E-160 prototype was upgraded to the 5.5 MW E2 model with a conventional crane, but the LCC140 could also be used in the future (Photo: Klaas Eissens).

On April 23, Enercon completed the upgrade of its existing 4.6 MW E-160 EP5 E1 prototype to the more powerful 5.5 MW E2 with the same rotor size. Commissioning is currently in progress.

The process involved replacing the permanent magnet generator (PMG) and the hub, as well as improving the E-module based on the tower, which contains all of the power electronics. The foundation, the tower and the E-160 E1 machine house remained untouched. The E2 is already a fully instrumented existing turbine with, for example, sensors and / or strain gauges attached to critical components. The commissioning process will therefore be much faster, which means that the test operation can start earlier.

The cumulative EP5 order intake with the main part for the flagship E-160 is already “well over 2 GW” according to the company. Several large projects in Vietnam, Canada and Chile as well as many small and medium-sized projects with the E-160 in Germany are about to start. 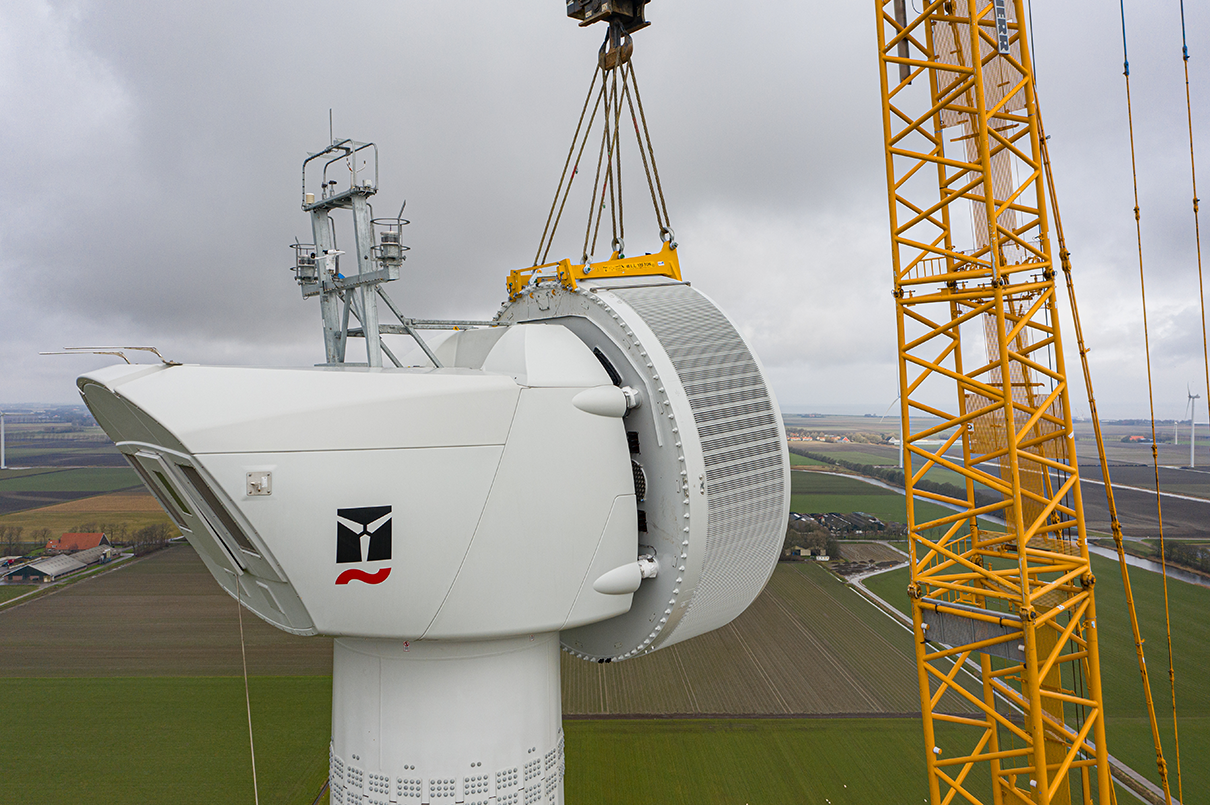 Konecranes Oij : tools will likely be utilized in one of...

Endangered Whooping Cranes Nest In Texas For The First Time In...